District Cooling Systems (DCS) can also be implemented with the co-generation technology. Co-generation is the simultaneous production of electricity and thermal energy (normally steam) from the same source of energy (fuel). Also known as combined heat and power (CHP), cogeneration systems use far less fuel to deliver the same amount of power and heat as produced by spate energy systems.

A gas turbine fueled by either gas or diesel produces electricity, which can be used to run electric chillers besides supplying electric power to the facility. The by-product, which is thermal energy, can be recovered and converted into steam.

The steam can be used to run a steam absorption chiller, supplying chilled water for the DCS. In some applications, the steam generated can also be used for other purposes such as: 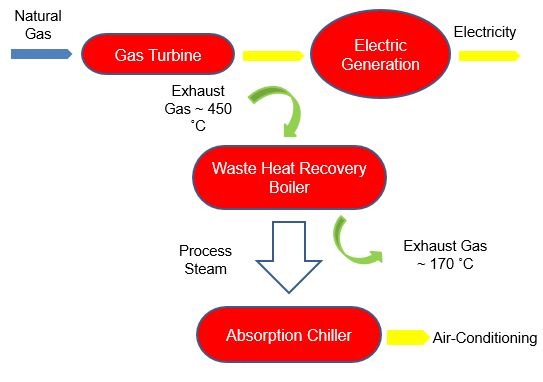 Co-generation is an excellent investment for many process industries and other facilities requiring large quantities of power and heat while minimizing the negative impact on the environment.

What Is A Waste Heat Recovery (WHR)?

The Waste Heat Recovery (WHR) is a collective abbreviation for ways and means to economize the utilization of energy within a system. It is an energy recovery heat exchanger that recuperates heat from hot streams with high energy content.